What We Have here are Companys willing to support our

the conditions found on this site, We are None Profit so

We rely on a Gentleman’s agreement.

Any Company Wishing us to run about their company

needs to get in touch with me 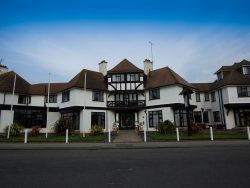 This is a personal review of this hotel, it is fit for disabled people and children, as long as the staff knows when you’re booking it.

The hotel is Family run, staff are lovely, they have a small sports center with swimming pool on site, some rooms have sea views. The website for this hotel is at the bottom of my write up.

They are in the heart of 1066 history with some lovely castles nearby. If you wish to travel to London for the day it’s only 1hr 40 mins away. The train station is about an 8 min walk away, I have never heard the trains in the hotel area, I also believe they allow dogs in some rooms only but please check this when booking.

For us coming with our daughter’s complexed condition, it is like home from home.

If you’re looking for a lovely place to stay, trust me your love it here like we do.

Click on the blue words to be taken to their site. 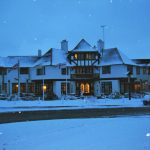 Built in 1928, the independently family owned hotel offers a range of accommodation in the main building and Sea House annex – some with uninterrupted sea views as far as the eye can see. The lovingly maintained 41 ensuite bedrooms range from single, double and twins through to family accommodation, some with interconnecting rooms, plus we have one with a hand carved Jacobean four poster.

Enjoy the lounge and a choice of dining areas, inside and out, for everything from a morning coffee to a wonderful 3-course meal or champagne afternoon tea. The Beach Terrace tables are uniquely situated on a patio amongst the pebbles – perfect for watching the waves and taking in the sea air. Take a deep breath 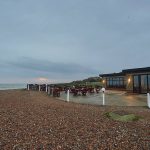 In early 2017 our Sussex Beach Hotel was significantly extended and refurbished to create a vibrant and contemporary eatery with expansive views over the beach. A visit to the Brasserie on the Beach is fabulous for fresh, seasonal dining from breakfast through to dinner (with last orders at 9 pm).  In tandem, we also designed and installed a Gin Palace, a brand new kitchen and refurbished the Leisure Club that is open to hotel residents, local members and their guests. Exciting times! But it went even further, we also completely gutted and renovated all our bedrooms. Our guests have loved the new look – we hope you enjoy it too. 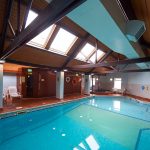 Due to the growth, success, and dedication of the team at The Cooden Beach Hotel in transforming the hotel, we picked up 3 prestigious awards at the East Sussex Women in Business Awards in 2017. The awards included ‘Business Woman of the Year‘ for Lesley Kimber, ‘Large Business of the Year‘ and ‘Overall Business/Business Woman of The Year‘. Learn more about the awards here.

If you would like to delight your loved ones with an experience at our Sussex Beach Hotel, please ask about our gift vouchers. They are beautifully presented greetings cards which we can post out for you.

For the convenience of our guests, we offer complimentary Wi-Fi throughout all areas of the hotel.

We look forward to meeting you… 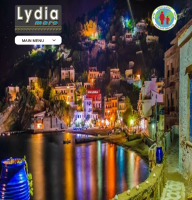 The third municipality of the island is mountainous and is named Raches, with 2200 residents. Its topography is very contrasting with its green slopes and bare, rugged rocks. Ikaria is mostly mountainous. It is crossed by the mountain chain of Atheros (Pramnos), of which the highest peak is 1040 meters. The majority of its villages are located in the valleys near the seaside and only a few are in the mountains. Ikaria has a tradition of producing a strong red wine (Pramnios Oinos, wine from Pramnos).

Many areas on the island are covered with big bushes, which give the landscape an image of rich vegetation. There are no rare animal species on the island. Besides the common types of animals, there are only a few flocks of sheep and goats called “raska” which break the silence of the island with the sound of the bells they have around their neck. The climate of Ikaria is mild.

Ikaria or Icaros as it was known during the classical years belongs to the Eastern Sporades, a group of islands along the coastline of Asia Minor, which was called Karia. 12 miles northeast from Ikaria stand the bare dominating cliffs of mount Kerkis of Samos, while in the south one can distinguish the little island of Patmos. Some miles to the east there are Fournoi, a complex of small islands, known in the classical years as Korsies. Geologically Ikaria is part of the formation that starts from Asia Minor, passes from Samos and extends to the Cyclades.

There is little arable land. The mountain chain ends up to the sea in the south, leaving very little land for cultivation, and this land is being utilized by the locals with the ancient technique of “pezoula”. However, the ground is much flatter on the north side of the mountain. Kambos, – ancient Enoe- in the windward side of the island, is a well-watered small plain but in general, there is more vegetation in the north part of Ikaria compared to the south.

Ikaria has rich water supplies especially after the construction of the two dams on the mountain. Ikaria has 76,2 cm of rain yearly. The most rain falls between October and March. However, as the cold is modified due to the influence of the sea, winter looks more like autumn of North America or Europe, with only some colder periods.

Our apartments, located a few meters from the beach of Therma, consist of 10 one-bedroom apartments (studios). All apartments are autonomous, two and three beds each with a great view over the picturesque bay and sea. The apartments located on the first floor have balconies.

In just a few meters from our hotel, there are taverns and cafes where you can enjoy fresh fish and delicious local dishes.  The island’s capital, Aghios Kirykos also the name of the port is situated 10 minutes from our hotel. Also, in walking distance from our hotel are the thermal spas, famous worldwide for the quality of the water and healing benefits. 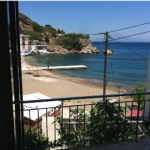 The geography of Ikaria is unique and best featured in its coasts and mountainous locations. Most of the villages of Ikaria lay on the plains near the coasts and only a few villages can be found in the mountains. The pristine coastline displays a wide range of unique coves and beaches which have remained totally unspoiled. The great beauty of the island is its luxurious greenery and its abundance of spring water, which is forming streams, refreshing waterfalls, rivers and impressive gorges. Halari Gorge is the most famous trekking spot on Ikaria island.

The city of Therma is the principal region on Ikaria for organized hydrotherapy, and its reputation and history date from the Classical Period. “Natural” hydrotherapy is also popular on Ikaria. Along Ikaria’s coastline, there are many areas where radioenergic hot mineral springs flow into the sea from the shoreline where it is possible for one to bath/swim. The hot mineral spring water pictured right is a popular natural bath in the area of Levkada.

For more info and stunning photos and booking forms etc click on the link below.

Here at G.Collins and Sons, I have a small, family run establishment.

It is my passion to provide the highest standards of quality regarding service and care for my clients and to offer the finest pieces to suit each individual’s requirements. It is equally important to me that my team and I offer a professional, relaxed and friendly environment in which everyone feels comfortable.

I am very proud of our highly experienced master jewelers, silversmiths, and watchmakers, who undertake repairs and commissions, including specialist restoration of antique items.

A Blog on traveling By my Good Indain Surgeon 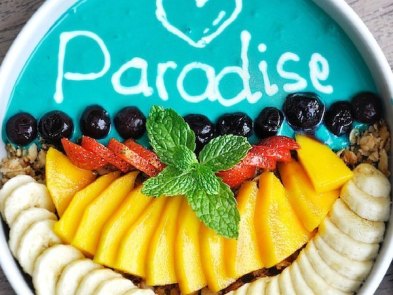 Run by a Parent of a disabled child

Many of us are trying to eat healthily every day and we all know that it is not always easy. Juice Plus+ with its 30 fruits and vegetables can help you bridge the gap between what you eat and what you should eat every day.

Get more out of life

If you want to feel really well, your body needs a range of valuable nutrients. So you need to eat a balanced diet to feel empowered, and that includes a varied selection of fresh fruits and vegetables.

Because that is not so easy to do on an everyday basis, we at Juice Plus+ have concentrated the best parts of 30 types of fruits, vegetables and berries in capsule form. You can now get the benefit of valuable phytonutrients, vitamins, and minerals. You will also be optimally supplied with powerful antioxidants that are important for your well-being.

Why not give it a try?

Juice Plus+ – the next best thing to fruits and vegetables.

WHY JUICE PLUS+ IS IMPORTANT

You want to eat more healthily but often do not have enough time to plan every meal perfectly. Juice Plus+ can help: our products bridge the gap between what we eat every day and what we should eat every day.

Order yours by clicking the link on the banner above or link below.