Bodhi is my fourth baby. I was young when I had my first baby. I nursed him for a little over a week, but with little to no help, I switched to formula. My next two both breastfed until they were two years old; breastfeeding came naturally to me and to both of them.

Bodhi was born with tracheoesophageal fistula and esophageal atresia (TEF/EA). His esophagus attached to his trachea, nothing attached to his stomach, and he was born unable to swallow. He had this repaired and was connected at three days. He was fed through a peripherally inserted central catheter (PICC line) and IVs for his first five days. During this time I pumped every three hours during the day and the night.

On November 22, 2018, Thanksgiving Day, Bodhi had his first belly full of breastmilk. He was fed through a nasogastric (NG) tube. I glowed with pride as I watched that milk trickle into his tube, knowing that he would know what it felt like to be full and how hard I was working to make all of that for him. On November 26, 2018, Bodhi passed his swallow study, which showed no leaks in his esophagus. He was now able to try a bottle for the first time. He didn’t take to it very well at first, but he slowly became confident with it. On December 9, 2018, our baby was eating full bottles of freshly pumped breastmilk and was able to have his feeding tube and all his other wires removed. 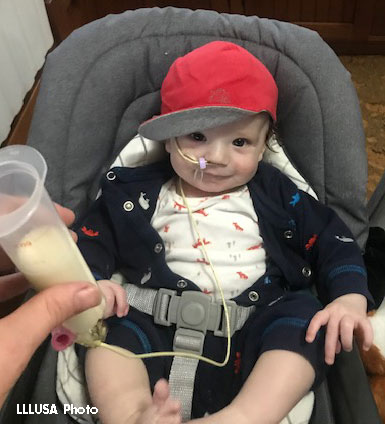 We went home from the Neonatal Intensive Care Unit (NICU).

Bhodi gets his first bottle

After hours of skin-to-skin contact and offering the breast before every feed, Bodhi latched and learned to nurse a week to the day after we came home. I was overcome with joy! On January 11, 2019, Bodhi started to choke and aspirate with every feed. I called the children’s hospital and said that something wasn’t right. At first, they wanted us to wait until Monday to come in because the 11th was a Friday, but I insisted that we go in that day. We brought him to the hospital and the swallow study showed a leak. An NG tube was placed again. We would later learn that he had developed a recurring fistula: his esophagus reattached to his trachea and created a leak. During this time his airways also collapsed.

For the next three months, I pumped. Bodhi was allowed nothing by mouth due to the leaks. I struggled with numerous clogged ducts and mastitis. We spent many nights in the hospital, and I cried as I watched the amount of milk I could pump drop. I would spend an hour pumping and barely produce one-half ounce of milk from both breasts. I would fight back tears and feel defeated as I watched the nurses pour formula into his feeding tube. I drank teas and took supplements and did anything I could to bring my supply up. I would sing to Bodhi as I pumped so that I felt that we were still bonding and that we were still connected.

Sometimes I felt robbed of the things I had wanted to experience so badly with my baby. For me, providing him with breastmilk meant survival. I couldn’t do much to help my baby during his first months of life, but the one thing I could do was provide him with the most nutritious food. Pumping made me feel like I was helping him. I felt so much pride when I could pump a full four ounces (which is what he ate then). I had to pump every two hours at this point to keep my supply up. 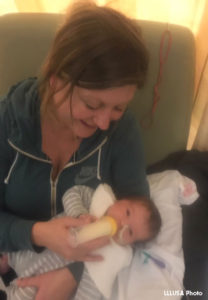 My milk supply easily dropped, too, because of the amount of stress I was under.

I did find a local woman who wanted to help me*. She donated a bag of breastmilk for Bodhi every month so that I no longer had to supplement. She even went lactose-free for him (lactose and formula can cause severe reflux issues, which is also a part of his diagnosis).

During this time, I found an online support group and reached out to see what other parents did for their babies who had developed a recurring fistula. I wanted to be prepared when the surgeon returned (he was away for a month at a pediatric surgeons conference), and I wanted and needed to know what procedures had the best outcome. Only 1 in 5,000 births result in some form of TEF/EA, and only five to 14 percent of those babies develop a recurring fistula, so this wasn’t a procedure often performed.

Within minutes of posting, I had numerous responses recommending that we go to the Esophageal Airway and Treatment Center at Boston Children’s Hospital. I contacted the hospital right away and knew within minutes that this was where we had to go. Because a recurring fistula does not happen all the time, our surgeon at home had not had the opportunity to perform surgery on a recurrence, and at the hospital in Boston, they performed the procedures weekly and treated children from all over the world who had the same diagnosis as Bodhi had.

On April 15, 2019, we traveled to Boston from Oregon for Bodhi to have his next major surgery at Boston Children’s Hospital. We had to leave our other three children in Oregon. Thankfully, my husband was able to take the time off and travel with us. We were told we could be there for up to three months. On April 23, 2019, he had his recurring fistula repaired and a posterior tracheopexy to open his airways (in a nutshell, they sewed his trachea to his spine). On April 26, his swallow study showed no leaks. He was able to try food by mouth again (with a bottle because he had chest tubes and wires and was in too much pain to be held). He ate a full four-ounce bottle of freshly pumped breastmilk. My heart exploded with pride to see his face as he tasted milk again for the first time in months.

ix days after his surgery, Bodhi lifted my shirt up and began to nurse. I couldn’t believe it! I truly didn’t think he would relearn to nurse or even be interested at that point. I was shocked he remembered how to nurse. The doctors had wanted to place a gastronomy (G) tube in Bodhi because they thought he would have oral aversion after going so long without eating by mouth, but we declined and agreed to three more months with an NG tube in hopes he would orally eat. Now here he was not only orally eating but nursing. I was so happy I cried. I wanted to shout to the world, “Do you see this? My baby is eating by mouth and nursing!” We were home by May 6. What could have been three months away was only three weeks.

I had to work hard to increase my milk supply during the first month after we returned from Boston. Bodhi was eating twice as much as he did when he was fed through a feeding tube, and I had to alternate breastfeeding and pumping and giving bottles while he strengthened the muscles in his mouth so he could properly suck.

Bodhi is now 13 months old and nurses for every feed and dream feeds throughout the night. I am so proud of him and so happy that I stuck with it. It brings me so much joy to watch my son eat, no matter what it is: every time he nurses, when he has a bottle with Daddy or his siblings, or when he has a spoonful of applesauce. He is such a strong, brave boy. His journey to be able to eat and our breastfeeding story is my favorite story.

For more information about milk donation and milk sharing, go to the LLL USA resource page at