My pregnancy had become complicated with polyhydramnios, preeclampsia and threatened premature delivery. I was induced as my health and the babies was at risk. Belinda was 1400gms birth weight and at birth showed respiratory distress so the staff were quickly intervening with her care.

They were both transferred to NIC where a tube was attempted to be put down Belinda’s oesophagus and consequently she was diagnosed with Long Gap Oesophageal Atresia Type B. Early surgery to place a gastric tube into her abdomen and an oesophagotomy were done to enable her to be fed and reduce the risk of further pneumonia.

It was not until a couple of weeks later after having aspirational pneumonia that the Drs diagnosed Tracheo Oesophageal fistula from the proximal part of the upper stub of the oesophagus. Included in the overall diagnosis was Tracheomalacia, small holes in the cardiac septum and low birth weight. Belinda was transferred by air ambulance to The Children’s hospital in Sydney in a serious condition. Meanwhile trying to maintain contact with her twin sister was very difficult as she was in another hospital NIC in Canberra so as new parents it was an emotional and exhausting time.

Over the next 4 months Belinda had to undergo further surgeries which she was able to recover from. She put on weight and was soon able to go home. Her twin was already home from hospital so it was a very busy time having a tiny baby with me while at the hospital with Belinda.

At home, care rotated around 1-2hrly tube feeding, overnight drip feeds, and allergies to most milk products causing severe pain, bloating and total discomfort with feeding. Meanwhile I was breast feeding Shelley (Twin1) and expressing to feed Belinda as well. Initiating sham feeding or at least taste testing of different foods was important so that when she was reconstructed she would have some semblance of taste and texture.

Recurrent colds were also an issue which obviously made her oesophagotomy drain more saliva and more often having to changing her clothes.
Dealing with the G Tube was interesting and I became quite adept in replacing the tube after it had fallen out or being pulled out accidentally.

At about 18 months of age surgery to repair and make an oesophagus from the outer curvature of her stomach was attempted but over the next couple of weeks Belinda became extremely sick and diagnosed with Necrotising Enterocolitis. The surgical repair of the oesophagus failed and Belinda was placed in a coma and on a ventilator and her gastric tube for feeding was replaced as was her Oesophagotomy.

She was a seriously ill little girl but seemed to always bounce back. Such a determined fighter to survive. A few months later she she was sent home again and the girls were able to ,interact with each other and life as a family became a bit more normal!!

The hardest part of Belinda’s care was introducing foods that didn’t cause some sort of gastro intestinal pain and diarrhoea. Having a background in nursing made a difference with Belinda’s care as more often than not I was telling the Drs what I needed for her ongoing care. 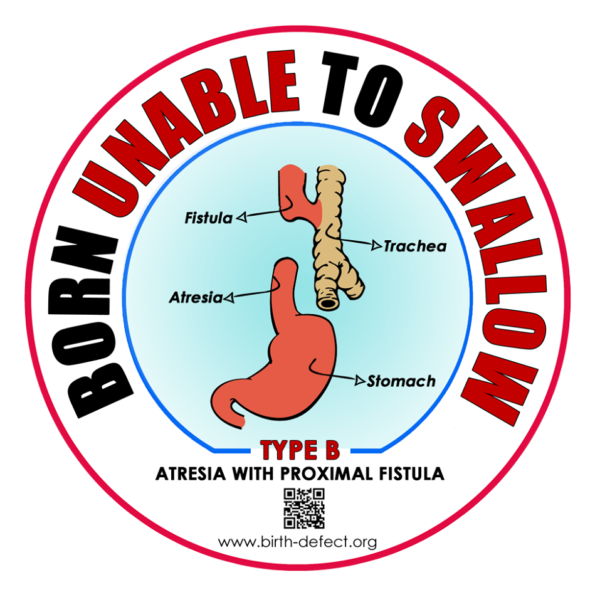 Finally the time came for Belinda to have reconstructive surgery. This time they decided to operate in 2 stages and over the next few months she had colonic interposition surgery done making sure the blood supply to the colon was viable. Again in ICU and other wards for weeks with lots of physiotherapy and nutritional and parental feeding. Finally, Belinda was allowed home again and with a functional oesophagus and stomach and ready to explore the world if food.

Over the next years there was many a time that Belinda ended up in hospital again whether it was because of things getting stuck in her oesophagus ( a 5cent piece, an apricot seed, piece of sausage!!!) or when she was having an anaphylactic reaction to exposure to balloons!! She had developed a latex allergy and it nearly ended in disaster. Strictures were the next thing to deal with but were not done as often as of late. The follow up medical care and support was really non existent. It seemed to be that once OA/TOF children had their surgery and were home then all was forgotten until the next medical emergency.

So Belinda faced life like she had as a baby with a happy and loving nature and determination and energy to survive. She loved school and made friends there which she still has today 37 years later. There were some hiccups with health along the way, a spate with epilepsy and asthma but she has risen above all that. In later years she left school, doing several courses while working a full time job. 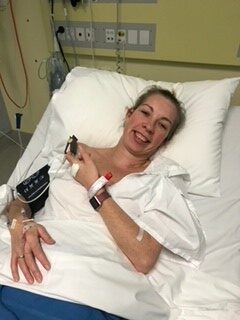 Now happily married and a mother 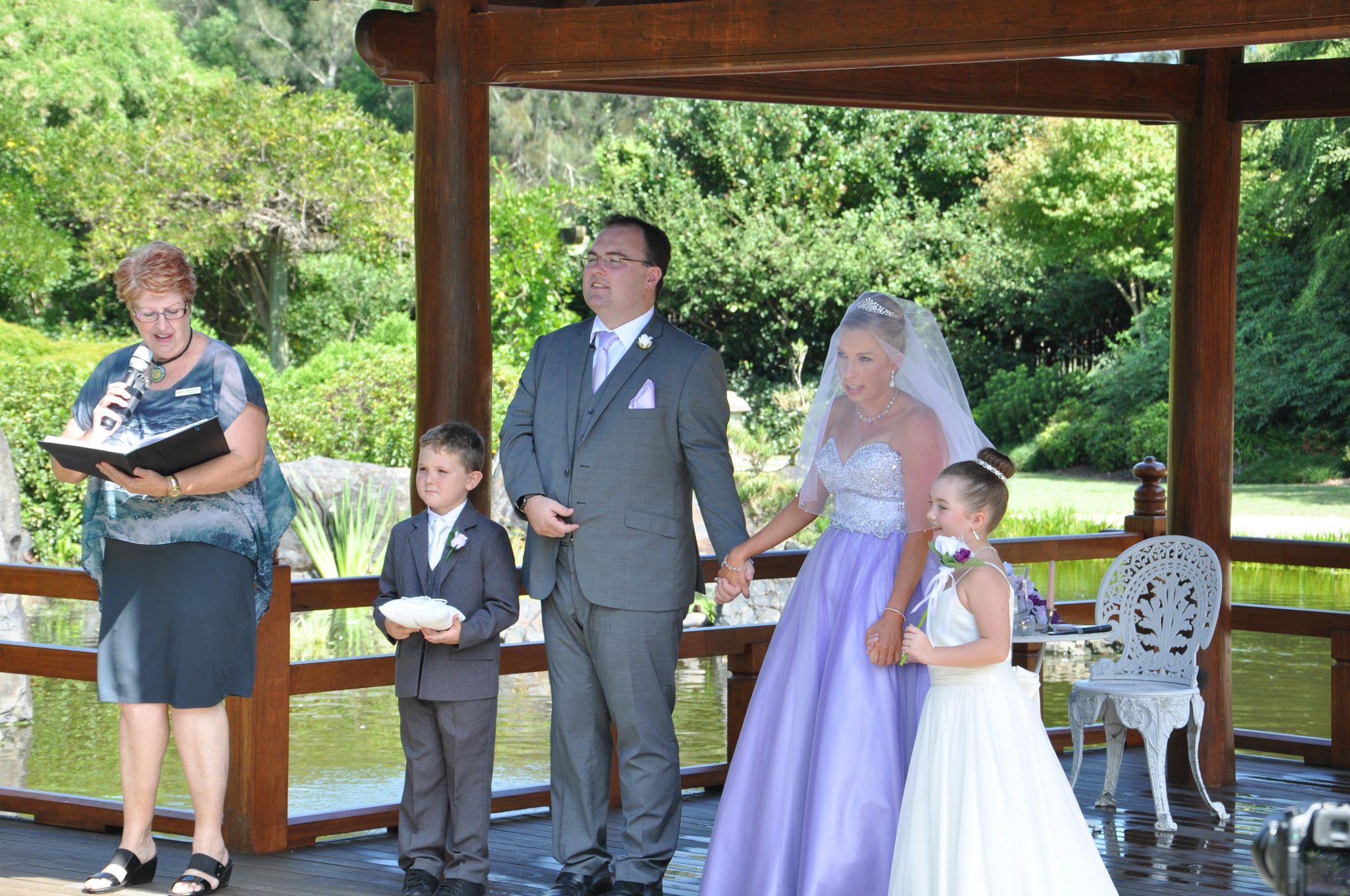 Lately she has developed diverticulitis in the colonic oesophagus

Belinda has had to face health issues again with the colonic oesophagus starting to breakdown.

She had trouble eating and ended up with a NJ tube being inserted so that she could get some nutrition into her and this eventually led to her having major surgery again and in a hospital 1,000 kms away from home. This time she was in for 5 weeks going through an operation and procedures with lots of pain and discomfort but bravely facing each day. Home again and eating fairly normally Belinda had trouble with Dumping Syndrome and severe forms of it.

So eating was and remains always a bit of a battle.

Eat and have pain or don’t eat and feel sick! Ongoing issues with needing nerve blocks for chest pain and frequent dilatations are part of her life and she faces them with her usual determination.

Lately she has developed diverticulitis in the colonic/oesophagus ( This is very Rare) which is causing more problems which she is still dealing with.
To sum my beautiful, loving and caring daughter up is to say she is like a magnet, she attracts and befriends people with her caring and happy nature and gives out love and energy around her. To this day I still have both my daughters which very nearly didn’t happen numerous times. Belinda’s journey is going to be a long one with lots of adventures on the way. Love her dearly. 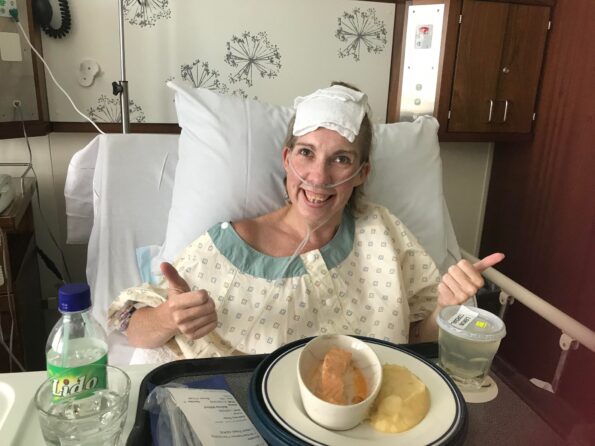