Unable to Burp? You May Have “Retrograde Cricopharyngeus Dysfunction

A support group for those suffering from Retrograde Cricopharyngeus Dysfunction (R-CPD) Symptoms include:
– The inability to belch.
– Abdominal bloating and discomfort/nausea, or chest pain, especially after eating.
– Socially awkward gurgling noises from the chest and lower neck as though the esophagus is churning and straining to eject the air.
– Excessive flatulence. 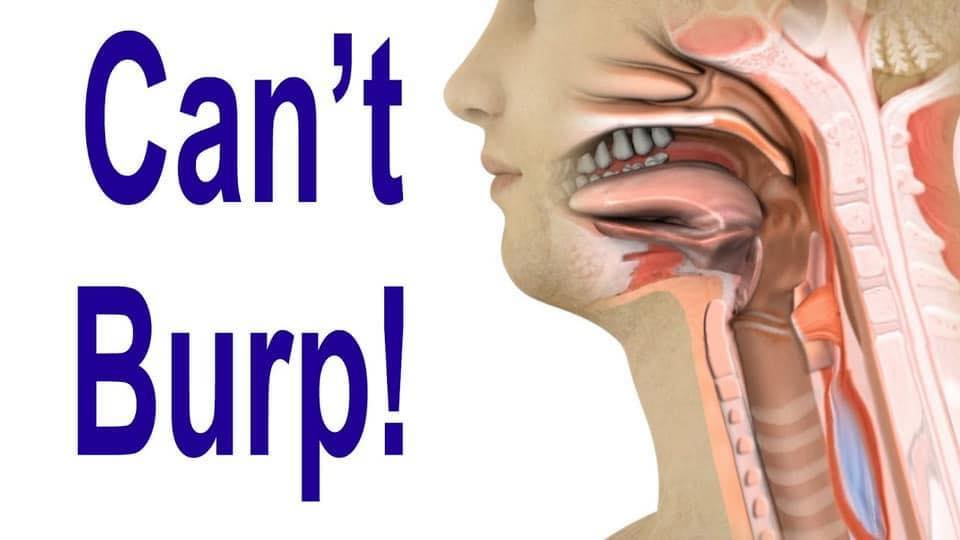 Inability to Belch and Associated Symptoms Due to Retrograde Cricopharyngeus Dysfunction: Diagnosis and Treatment

Abstract
Objective. To propose and test the validity of a new syndrome called retrograde cricopharyngeus dysfunction (R-CPD) that explains the inability to belch and the associated symptoms of loud gurgling noises, chest and abdominal pain/ distention, and excessive flatulence, as well as to report the results of botulinum toxin (BT) injection into the cricopharyngeus muscle (CPM) for both diagnosis and treatment of R-CPD.

Study Design. To develop a case series of consecutive patients matched to the syndromic features of R-CPD, inject the CPM with BT as a concurrent diagnostic and therapeutic
maneuver, and assess results.

Setting. Bastian Voice Institute (Downers Grove, Illinois).
Subjects and Methods. Consecutive (unselected) patients presenting with the inability to belch and associated symptoms were matched to the proposed syndrome of R-CPD, treated
with BT, and followed for effect on symptoms over time. Results. All 51 patients achieved the ability to belch and relief of associated symptoms and the majority seem to have ‘‘retrained’’
the ability to belch on a potentially ‘‘permanent’’ basis. Conclusion. R-CPD can be diagnosed syndromically, using a symptom complex; clinical diagnosis is validated by relief of
symptoms after BT injection; and BT into the CPM is an efficacious treatment, whose benefit appears to often last longer than the pharmacologic duration of action of BT.

Read the FULL Abstract, click on the link below.

“Welcome to the Bastian Voice Institute website. Here you can learn about our practice, our clinicians, the services we offer, how to make an appointment, and more. Please feel free to contact our office if we can be of further assistance to you. You may also be interested in our educational website.

Bastian Voice Institute – Our mission is to provide the highest quality medical, surgical, and behavioral care and consideration for persons with voice, swallowing, and airway disorders.

The inability to belch

Social inhibition as a result of above

Difficulty vomiting (common but not universal)

Some patients undergo extensive testing with no specific diagnosis and more frustratingly, no clear course of treatment. There is a very rare condition that prevents certain individuals from being able to burp and for those afflicted, it can be uncomfortable. This condition known medically as retrograde cricropharyngeus dysfunction (R-CPD), causes daily issues for afflicted patients that profoundly affect the quality of life.  At the top of the esophagus, you find the cricopharyngeus (CP) muscle acts like a one-way valve or sphincter that briefly opens to allow food and liquids to pass into the esophagus during normal swallowing. When air builds up in the stomach this cricopharyngeus (CP) muscle opens up to allow the excess air out, allowing us to BURP, but however, for patients suffering from R-CPD, the CP muscle normally relaxes during the swallow, but NOT when air erupts into the esophagus, there is nowhere for it to go.

Fortunately, Dr. Bastian in Chicago published a small series that points to a seemingly simple, yet effective treatment for those suffering from R-CPD, mainly botox injections into the cricopharyngeus muscle, specifically 4 injections containing a total of 50-75 units diluted in 2-4ml saline. This procedure is technically not difficult.

Even better, unlike most conditions for which botox must be readministered every few months for continued relief, for most patients, only a single treatment often resolved R-CPD. A more “permanent” treatment would be to divide the cricopharyngeus muscle (cricopharyngeal myotomy).

Some non-surgical interventions that can be tried for relief (but may not necessarily work for everyone) include:

Air Vomit: This technique is basically attempting to trigger a vomit by sticking a finger or two down the back of the throat.

Laying on your back slightly upside down (head lower than the feet): This causes the air to “rise” away from the throat and into the stomach and intestines. Eventually, you fart the air out.

Shaker Exercise: Lie flat on your back. Lift your head and look at your toes (lift head only, do not raise shoulders). Hold this position (the goal is 60 seconds). Relax, lower your head, and rest one minute. Perform these steps three times. Then, lift the head up and lower the head quickly 30 times (head only, do not raise shoulders). Remember to breathe while doing exercises. Do all steps three times a day. Wait at least 30 minutes after eating before doing exercises.

Thank you for your note.  I have looked over your impressive website.  I think it has been doing and will continue to do a great deal of good.  Persons with unusual or even “orphan” disorders like EA-TEF or R-CPD, etc. can have difficulty finding their way to centers with a lot of experience. You are helping to address that problem!

I am sorry to hear about your niece’s difficulty.  If she has R-CPD and if her case is severe, she is miserable much of the time.  But there is a solution!  For R-CPD, we now have a caseload of > 500 and I believe the total treated as of noon tomorrow will be approaching 485 patients. There is always a range of results, but very routinely, they are thrilled after treatment.  Many use the term “life-changing.”

You will be interested to know that I do not yet have a single patient diagnosed other than by their peers.  The exception may be one patient whose GI doctor had just read my initial paper describing 51 patients.  I can’t remember if the patient took that paper, or if the doctor found it independently.

Your niece may also find a youtube video entitled “Can’t Burp” of interest.   It is designed as much for the family and friends of those with R-CPD.  That’s those around persons with this disorder sometimes have difficulty understanding why the inability to burp can cause such severe daily misery… Here’s the link:

(This is worth watching if you think you might have this)

People can also find information on www.laryngopedia.com, my personal teaching website, or on a sub-Reddit, I am told by patients has good information.  It is called “no-burp.”

You asked whether R-CPD and EA-TEF might be related.  I do not think so.  So far, everyone with R-CPD has completely normal anatomy.  The sphincter works perfectly in the antegrade (forward) direction but refuses to relax in the retrograde (reverse) direction to permit belching, and sometimes vomiting.

The initial paper describes precisely what to do for R-CPD, by the way.  In case you found one of my other two papers, here’s the original description with treatment details:  https://journals.sagepub.com/doi/pdf/10.1177/2473974X19834553  It is an open-source but peer-reviewed journal that I chose specifically because it is not behind a paywall, and so your niece can find it, too.  If you search “Bastian belch” it comes right up…

Again, hats off to you for the very important work you are doing.

PS:  I am sure there are several in the UK now doing this work.  The first doctor there I explained the disorder to is Dr. Karagama in Manchester…  I have also communicated to doctors in Spain, Netherlands, Germany, and Spain.

Dr. R Bastian in his email talks about Dr. Karagama from England

Someone with this condition talking about living with it, plus his visit to Dr. Karagama London

No-Burp: The Struggle Is Real (reddit.com)