Duodenal atresia occurs in the duodenum and causes a blockage. The duodenum is the bowel adjoining the stomach. Atresia means gap. Occasionally there may not be a complete atresia but a partial narrowing (stenosis) instead.

Duodenal atresia can be diagnosed on a ultrasound scan antenatally. This is a rare condition, the incidence is thought to be around 1 in 10,000 births. There is no known cause for this, but it is believed to have occurred sometime during the early weeks of pregnancy.

The diagnosis is made by seeing two fluid filled areas in the baby’s abdomen which are the dilated stomach and duodenum. This is referred to as the ‘double bubble’ of duodenal atresia. This may have been detected on an antenatal scan or may not be detected until after the delivery when the baby starts to vomit.

Duodenal atresia can result in an increase in the amniotic fluid around the baby (known as polyhydramnios) which may lead to an early delivery.

Duodenal atresia can be associated with other abnormalities. Approximately one third of babies with duodenal atresia have a chromosomal condition known as Down’s Syndrome and it is possible to test for this antenatally. This will be discussed with you by the team caring for you during your pregnancy. Other investigations may be necessary after the baby is born. 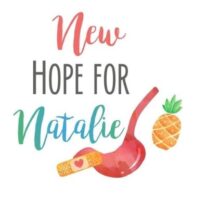 She was born with Duodenal Atresia, had surgery 1 day old. She was sent home from nicu after 10 days. We were home sept 10,2019… and actually this day today a year ago I took her back to the ER because she wasn’t handling bottles… she went from 2 ounces every 3-4 hour to almost half ounce every 5 excessive throwing up… they checked her surgery site kept saying everything was scone just reflux. They gave me the option to stay over night for observation because I wanted them to see her vomit. I stayed. The tech came in and did her routine and we found she was hypothermia and everything changed instantly.

We administer 5 attempt spinal never got and spinal fluid to send for culture so easily booked a 21 day stay for iv meds. She was only 3 weeks old. So they wrote me off and thought I brought her for hypothermia not the throwing up multiple times during our stay. I kind of gave up fighting and said I’ll just handle shit out patient because you guys aren’t going to help me inpatient.

We ended up back 4 days later she had loss 1 pound within our discharge to coming back. Again they kept telling me she was fine I said how come she was fine with a feeding tube but not with a bottle. So I ended up taking her AMA out of this hospital and drove to the next best. We ended up staying for 2.5 weeks there

They let her stay on NG because they had no idea what was going on but she was only 7 pounds at 3.5 months old they wanted her to grow and get stronger without surgery again. We went home November 4,2019. She was great 23ml per hour 24 hours day. We started in December having issues, pooping like excessively 12 plus times a day. Did a whole culture of poops 8 containers, nothing was wrong it smelled horrible…

Fast forward come February.. I said look something’s got to give let move to the next step a g tube please. We got on the list covid hit pushed us back a month…Her not handling feeds was a roller coaster I’d called it. At the very top she was completely miserable throwing up, then the next day she was coming down and evening out for say 2 days then it started back climbing again with issues… this has been her most common pattern. Every few days she’s at her worse( builds up)

They did ear tubes, g tube and her gi doc did a gi scope and push contrast in and it instantly pushed back out towards her throat…. which he pushed the scope farther we found
Proximel jujunel obstruction from adhesions. Her bowel was basically kinked.

Brody and his DA

I had a fairly hard pregnancy and was never actually diagnosed with polyhydramnios even though my fluid levels were extremely high. I had multiple ultrasounds and no one had ever noticed an issue with the baby. My water broke at 35 weeks and luckily I had to deliver at a different hospital than originally planned.

Not only was Brody a preemie born at 35 weeks, but after being observed in the nicu for a the first 12 hours he was then diagnosed with complete duodenal atresia, which means his stomach and intestines didn’t connect.

He had surgery less than two days after birth to correct it. He was in the nicu for about a month. He had a few setbacks at first and had to be intubated and they were concerned about seizures. As days went on he was doing better and they attributed his breathing issues to being a preemie, but then he started having issues with his pic line so they had to take it out and give him another.

Finally his incision was healing great and he was stable enough for us to hold him and that was the best day of our lives! Brody was able to eat food by the second week after surgery. The Dr’s we’re going to feed him through a NG tube, but the day before he was supposed to be fed he pulled it out.

They decided to let him be bottle fed and see how he did and if they needed to put a new tube in they would have. Luckily Brody took the bottle with ease and I was even able to give him his first! Once he got the hang of eating we were able to leave! While Brody being in the NICU was the hardest thing we have ever gone through looking at him today you would never know he had any major issues. He still has issues gaining weight, but he is your average 2 year old. 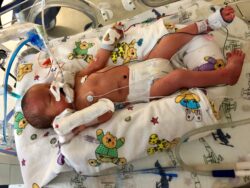 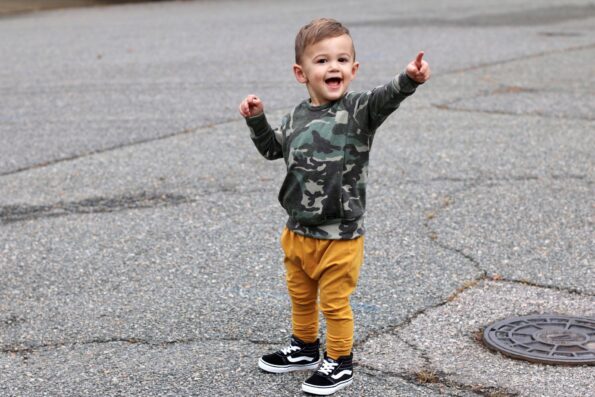