that help us when the can.

I am a Paediatric Surgeon. My name is Dr. Divya Bhadoo. I am running my own hospital named DIVYDEEP Hospital. This hospital is located in HISAR city of Haryana state of India. 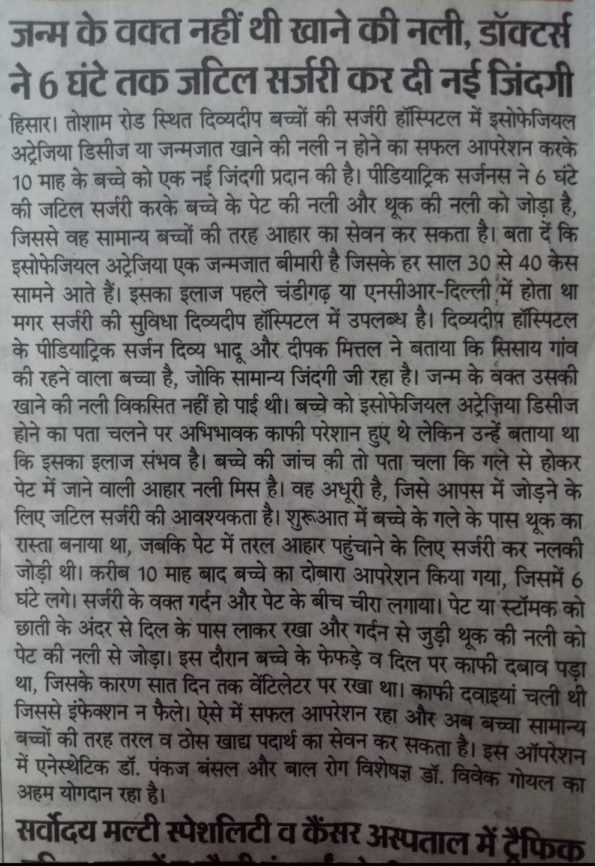 EA/TEF patients are at risk for VCD

The purpose of this study was to determine risk factors and long-term outcomes in patients with esophageal atresia +/−tracheoesophageal fistula (EA/TEF) with vocal cord dysfunction (VCD) owing to recurrent laryngeal nerve (RLN) injury.

Of 197 patients, 22 (11.2%) were diagnosed with VCD by indirect laryngoscopy following EA/TEF repair. Aspiration was documented on video swallow study for 21 patients, and as a result, 13 required thickened feeds and 8 required gastrostomy tube feeds. Of the 16 H-type TEF patients, 8 (50%) had VCD. Following discharge, 20 (90.9%) patients with VCD eventually tolerated full feeds orally without aspiration but only 8 (36.4%) had documented recovery of vocal cord movement at long-term follow up (mean 452 days). Overall, patients with VCD were more likely to have feeding modifications, increased exposure to radiological studies, and increased the frequency of Otolaryngology follow-up compared to EA/TEF patients without VCD.

EA/TEF patients are at risk for VCD. Clinical improvement did not always correlate with recovery of VC motion. Strategies to minimize RLN damage will improve outcomes and quality of life for EA/TEF patients.

Cook Medical received a Rare Impact Award from the National Organization for Rare Disorders (NORD) this month. Accepting the award were Dr. Mario Zaritzky and, Vihar Surti, a director of Global Research & Development at Cook, who collaborated to develop the Flourish™ Pediatric Esophageal Atresia device.

The Flourish™ Pediatric Esophageal Atresia device uses rare earth magnets that are inserted into the upper and lower ends of the infant’s esophagus. Over the course of several days, the magnets gradually stretch both ends of the esophagus, after which the tissue connects to form an intact esophagus. Previously, this condition could only be repaired surgically, but now doctors have another option.

“We have one thing in mind every day at Cook, and that’s making a difference in patients’ lives,” said Barry Slowey, president of Cook Winston-Salem and vice president of Cook Medical’s Endoscopy specialty. “Flourish holds a very special place for so many of us here at Cook and to see the positive effects that it’s had on these children, is a wonderful reminder of the mission and passion we all share.”

In order to treat pediatric patients affected by this rare disorder, Flourish™ received approval from the FDA in 2017. The product is not yet available to physicians. Esophageal atresia affects around 1 in 2,500 newborns.1 Humanitarian Use Device (HUD) designations are reserved for the treatment or diagnosis of a disease or condition that affects fewer than 8,000 individuals in the United States per year. Between the time that FDA granted HUD designation in 2010 and approved the Humanitarian Device Exemption (HDE) for Flourish in 2017, 16 babies were successfully treated.

The Rare Impact Awards are presented each year by NORD, to organizations that provide care for the 1 in 10 Americans living with a rare disease. As an advocate for those affected by rare medical disorders, NORD has offered services to patients and their families for 35 years. The group is made up of over 260 patient organizations working towards the cure and treatment of rare disorders, similar to Cook’s work with pediatric esophageal atresia.

Infants and children with esophageal atresia commonly present with swallowing dysfunction or dysphagia. Dysphagia can lead to a range of significant consequences such as aspiration pneumonia, malnutrition, dehydration, and food impaction. To improve oral intake, the clinical diagnosis of dysphagia in patients with esophageal atresia should focus on both the pharynx and the esophagus. To characterize the complex interactions of bolus flow and motor function between mouth, pharynx, and esophagus, a detailed understanding of normal and abnormal deglutition is required through the use of adequate and objective assessment techniques. As clinical symptoms do not correlate well with conventional assessment methods of motor function such as radiology or manometry but do correlate with bolus flow, the current state-of-the-art diagnosis involves high-resolution manometry combined with impedance measurements to characterize the interplay between esophageal motor function and bolus clearance. Using a novel pressure flow analysis (PFA) method as an integrated analysis method of manometric and impedance measurements, differentiation of patients with impaired esophagogastric junction relaxation from patients with bolus outflow disorders is clinically relevant.

Esophageal Atresia With or Without Tracheoesophageal Fistula

Esophageal Atresia With or Without Tracheoesophageal Fistula

The neonate with oesophagal atresia cannot swallow and drools copious amounts of saliva. Aspiration of saliva or milk, if the baby is allowed to suckle, can lead to an aspiration pneumonitis. In a baby with oesophagal atresia and a distal TEF, the lungs may be exposed to gastric secretions. Also, air from the trachea can pass down the distal fistula when the baby cries, strains, or receives ventilation. This condition can lead to an acute gastric perforation, which is often lethal.

Esophageal dysmotility is almost universal after esophageal atresia (EA) repair and is mainly related to the developmental anomaly of the esophagus. Esophageal dysmotility is involved in the pathophysiology of numerous symptoms and comorbidities associated with EA such as gastroesophageal reflux disease, aspiration and respiratory complications, and symptoms of dysphagia and feeding disorders. High-resolution esophageal manometry (HREM) has facilitated the characterization of the dysmotility, but there is an incomplete correlation between symptoms and manometrical patterns. Impedance coupled to HREM should help to predict the clinical outcome and therefore personalise patient management. Nowadays, the management of esophageal dysmotility in patients with EA is essentially based on treatment of associated inflammation related to peptic or eosinophilic esophagitis.

Following esophageal atresia (EA) repair, motility disorders of the esophagus are almost universal and may lead to gastroesophageal reflux (GER), aspiration, feeding disorders, and dysphagia in the first few months and years of life. Later on, chronic acid exposure of the esophageal mucosa due to abnormal esophageal motility can lead to Barrett’s esophagus and esophageal carcinoma, which are , concern. In this review, we will focus on the definition, pathophysiology, and treatment of esophageal dysmotility in patients operated for EA.

Same but in PDF Format

Perioperative management of infants with esophageal atresia and tracheoesophageal fistula (EA/TEF) is frequently based on surgeon experience and dogma rather than evidence-based guidelines. This study examines whether commonly perceived important aspects of practice affect the outcome in a contemporary multi-institutional cohort of patients undergoing primary repair for the most common type of esophageal atresia anomaly, proximal EA with distal TEF.

292 patients with proximal EA and distal TEF who underwent primary repair were reviewed. The overall mortality was 6% and was significantly associated with the presence of congenital heart disease (OR 4.82, p=0.005). Postoperative complications occurred in 181 (62%) infants, including: anastomotic stricture requiring intervention (n=127; 43%); anastomotic leak (n=54; 18%); recurrent fistula (n=15; 5%); vocal cord paralysis/paresis (n=14; 5%); and esophageal dehiscence (n=5; 2%). Placement of a trans-anastomotic tube was associated with an increase in esophageal stricture formation (OR 2.2, p=0.01). Acid suppression was not associated with altered rates of stricture, leak or pneumonia (all p>0.1). Placement of interposing prosthetic material between the esophageal and tracheal suture lines was associated with an increased leak rate (OR 4.7, p<0.001), but no difference in the incidence of recurrent fistula (p=0.3). Empiric postoperative antibiotics for >24h were used in 193 patients (66%) with no difference in rates of infection, shock or death when compared to antibiotic use ≤24h (all p>0.3). Hospital volume was not associated with postoperative complication rates (p>0.08). Routine postoperative esophagogram obtained on day 5 resulted in no delayed/missed anastomotic leaks or a difference in anastomotic leak rate as compared to esophagograms obtained on day 7.

Helicobacter pylori and Barrettes esophagus: a protective factor or a real cause?

Helicobacter pylori and Barrettes esophagus: a protective factor or a real cause?

Not-with-standing the definite aetiopathogenetic path of certain diseases, the relationship between Helicobacter pylori (H. pylori) and Barrette’s esophagus (BE), a condition that increases the risk for dysplasia and consequently adenocarcinoma of the distal esophagus and esophagogastric junction, remains uncertain. This paper reviews the current scientific literature with emphasis on the protective correlation between H. pylori infection and BE and demonstrates that a causal relationship has not been disproved with certainty. Furthermore, H. pylori infection could pose a risk for the onset of gastroesophageal reflux disease (GERD), which could in turn trigger BE, a precancerous lesion, and subsequently, cause cancer. By analyzing the current available data, this article tries to verify that H. pylori infection is the underlying cause of esophageal cancer.