From Dubai To Denver to See Dr Steven Rothenberg

Taken from a Chat Mum had with the Stephen Wyles

I studied Boston doctor profiles, but it doesn’t impress me. And when U started to read about Dr.Rothenberg, I felt that only he l can trust, then after all I discovered that he is the Founder, of minimally invasive surgery, without making big incisions, three small holes, and did his first operation in Colorado in 2000.

From Dubai To Denver to See Dr Steven Rothenberg

DENVER (CBS4) – A 6-year-old girl from Dubai is up and eating after surgery at Rocky Mountain Hospital for Children.

Khadija Belkhair was born with a severe esophageal stricture, short esophagus, and hiatal hernia, making it difficult for her to swallow. “When I was eating, it was going down and then up,” explained Khadija.

It became a real problem for the girl when she turned two.

Her parents struggled to get a proper diagnosis before finally finding surgeons in Moscow who were ready to perform a major open chest surgery that would have included removing her esophagus.

But her mother, Irina Antonemko, had been researching the condition on the Internet and that’s where she found information about Dr. Steven Rothenberg, the Chief of Pediatric Surgery at the Rocky Mountain Hospital for Children.

“I very carefully study and read everything that he is doing,” Antonemko said, “that he has created during all his experience.”

Antonemko tracked down Rothenberg to Denver and emailed him to see if he would treat Khadijia.

“One of our specialties is being able to do this minimally invasive without making big incisions,” explained Rothenberg.

“Her mother had sent me some information and told me of what the planned surgery was in Moscow. When I looked at the X-rays and I said I thought that might not be necessary.

“I thought it might be possible to dilate the stricture, open it up and then pull the stomach back down into the abdomen and fix the hole in the diaphragm that was allowing it to go up there.”

The doctors performed the surgery on December 10 and by the time we met Khadijia on Dec. 17, she was dancing and singing around the hospital lobby. “She looks terrific,” said Rothenberg. “She looks like she didn’t have surgery.”

It’s a sentiment her mother echoes.

“It is a huge difference. She was feeling… the third day after the operation,” Antonemko said.

“I’m sure now that all our family life will be different, it’s like (having) a newborn.”

But Rothenberg explained there’s this case is about more than just the surgery, pointing to Antonemko’s determination to make sure her daughter got the right treatment.

“I think the real lesson here is the greatest advocated for children are their parents.”

As for Khadijia, she’ll head back to Dubai with a sparkly pair of cowboy boots from Colorado and a taste for caviar from Russia. 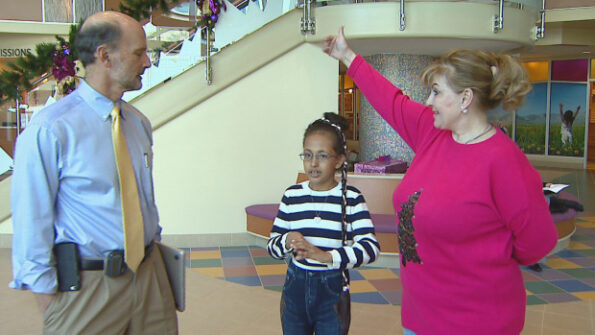