How we meet Dr. Steven Rothenberg

Our daughter, Piper (twin to sister Paisley) was born with many challenges to overcome.

At 12 weeks gestation, we found out she had an omphalocele. This meant that her liver and some intestines were forming outside of her abdomen and would need immediate surgery after birth. It was a long and stressful pregnancy, seeing countless doctors and having countless ultrasounds done. The doctors at Maternal-Fetal Medicine informed us that this was a midline defect, so there could be more that we find out after birth even though the omphalocele was all that we were seeing at this point on ultrasound and even fetal MRI.

Fast forward several months, the twins were born on November 6.

It was a day full of many emotions and one we will never forget. Both girls were immediately rushed to the NICU, knowing that Piper would soon need surgery on her belly. The NICU staff and doctors worked quickly to stabilize our twins, especially Piper. They both required NG tubes for feeding due to prematurity, and as they were placing Piper’s NG tube, things took a huge turn. The tube would not go down her esophagus, and they felt it get stuck.

After bringing in an x-ray, it was determined that she had a condition called EA/TEF.

After bringing in an x-ray, it was determined that she had a condition called EA/TEF.

My husband and I had never heard of this before so it was a very scary time.

She was rushed into a 4-5 hour surgery to partially repair her belly, and repair her tracheal-esophageal fistula. The surgeon was unable to repair her esophageal atresia as the gap was too long, and would be too traumatizing to her tiny body after what she had already gone through. This was the beginning of an 83 day long, grueling NICU stay that was full of ups and downs. She got a g-tube for feeds as her esophagus still was not connected to her stomach, and we had no idea when or how that surgery could be done for her.

All we knew was that her current surgeon informed us that he was unable to perform the esophageal repair and we had to look at other options. We felt like she was the only baby born with these conditions and we had no idea which direction to turn. It was lonely and hopeless to say the least, as she struggled and struggled in the NICU to maintain her secretions and would have “blue spells” several times a day. We didn’t know when or if we would get to take her home. It was a horrible thing to watch her recover from this belly wound, see her turn blue from choking on her own saliva, and watch the staff place suction deep in her throat to help her breathe, which in turn made her gag severely causing stress on her sore belly.

We were living in a nightmare.

Finally, Piper had grown bigger and stronger and things took a turn for the better. We were able to take her home at almost 3 months old with a repogle tube placed through her nose and connected to gravity suction to help drain her secretions. We also went home with an apnea monitor on at all times. We were so happy to be home but still felt scared and hopeless with the unknowns of when she could have an esophagus that would be in 1 piece.

I began to search the internet and found a few support groups on Facebook related to this condition. I was blown away with all the families dealing with this and I learned so much through conversations with some. I was looking for help and advice on where we should go next, and one of the main places that was brought to my attention was Boston where they perform the Fokker repair.

I researched this surgery, and I was terrified. I thought there is no way my daughter would be able to survive this kind of surgery, and it sounded barbaric to me. Piper had been through so much already and I knew her omphalocele would make this extremely difficult to perform. Hopelessness settled in once again.

Then Steve Wyles commented on a post of mine mentioning Dr. Rothenberg in Denver, CO. I was skeptical, but I began my research again and quickly discovered that Dr. Rothenberg is highly respected as an expert in treating this condition, and even trains other doctors in repairing this specific birth defect. And one thing that stuck out to me the most, was that he performs the surgery with a laparoscopic approach.

I knew how beneficial laparoscopic surgeries were to patients

As a surgical technologist myself, I knew how beneficial laparoscopic surgeries were to patients rather than opening them up with bigger incisions. I learned that he places the infant on their side, and he makes 3 smaller incisions into the other side. One for the camera, and 2 for the instruments. And the surgery is then performed in a much less invasive way. After learning this I knew that we just had to see Dr. Rothenberg, and this is the only way my daughter would be able to have a normal esophagus. Dr. Rothenberg is also a member on one of the support groups on Facebook, and the fact that he commented on one of my posts and answered a question of mine really spoke to me. Surgeons are busy people.. and the fact that he took the time to answer my question (someone he had never met) on Facebook impressed me.

Steve Wyles (someone who I am extremely thankful for) gave me Dr. Rothenberg’s contact info and the scheduling began. The next thing we knew, my husband and I and our twins, flew to Denver by plane for Piper to see Dr. Rothenberg in hopes that he would see her as a candidate for surgery.
Surgery was done the next day at 4 months old and was a big success.

Dr. Rothenberg improved my daughter’s quality of life for the better. She is now 15 months old, learning to eat by mouth, and crawling everywhere. Piper has made huge strides and we owe it all to her surgeons.

Steve Wyles’ passion is to help families who are dealing with this condition and we feel so lucky that he led us to one of the top surgeons in the world, Dr. Rothenberg.

We would not be where we are today without either of them and we could never thank them enough! 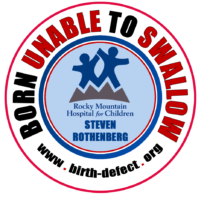